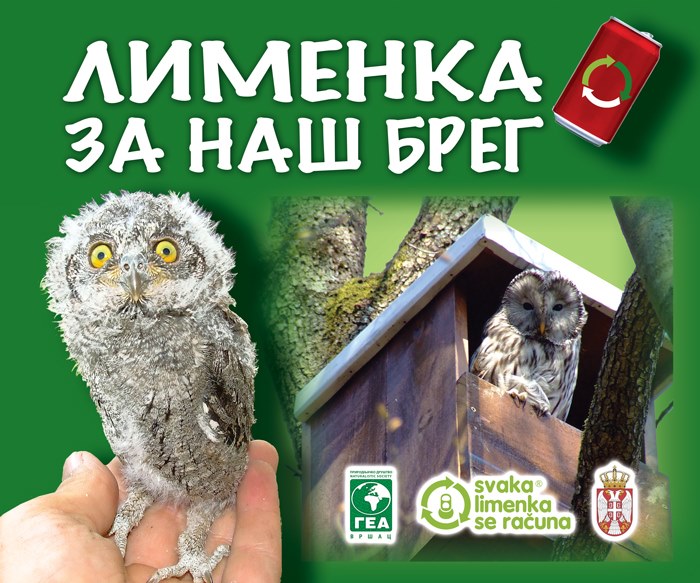 In partnership with environmental organization GEA, we started “The Can for Our Hill” project where the main activity was the collection of cans in 100 locations in the city of Vrsac. Money from the cans will be invested into protection of birds and other animals, as well as for education.

Vrsac mountain is the richest ornithological habitat in Serbia. This event was a good example of involving the local community in can recycling. The whole project is financed by the Ministry of Environmental Protection. 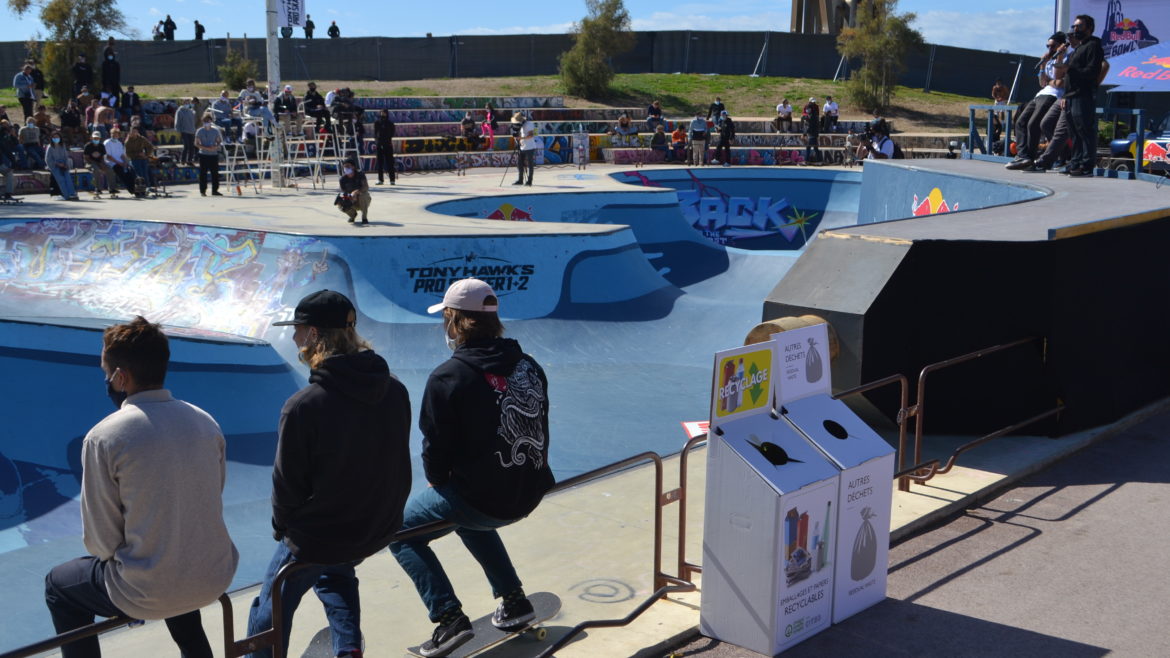 After being back in the field with Tour de France, Chaque Canette Compte was active in Marseille despite the threat of COVID, accompanying its brand partner Red Bull.

CCC has managed recycling for all of Red Bull’s events in France for three years now, and specifically for one of the top skateboarding competitions in the world: The Bowl Rippers. In 2019, we were present at the brand’s five main events: RB FlugTag, RB 400, RB Bowl, the finale of RB Dance Your Style in Paris, and off course the Bowl Rippers.

As part of its partnership with CITEO (the French Green Dot authority), CCC manages overall recycling using our co-melting specific boxes where we highlight can recycling.

Last year, over 1.2 tons of packaging (and lot of Red Bull cans) were collected and recycled thanks to our presence at the main RB events. 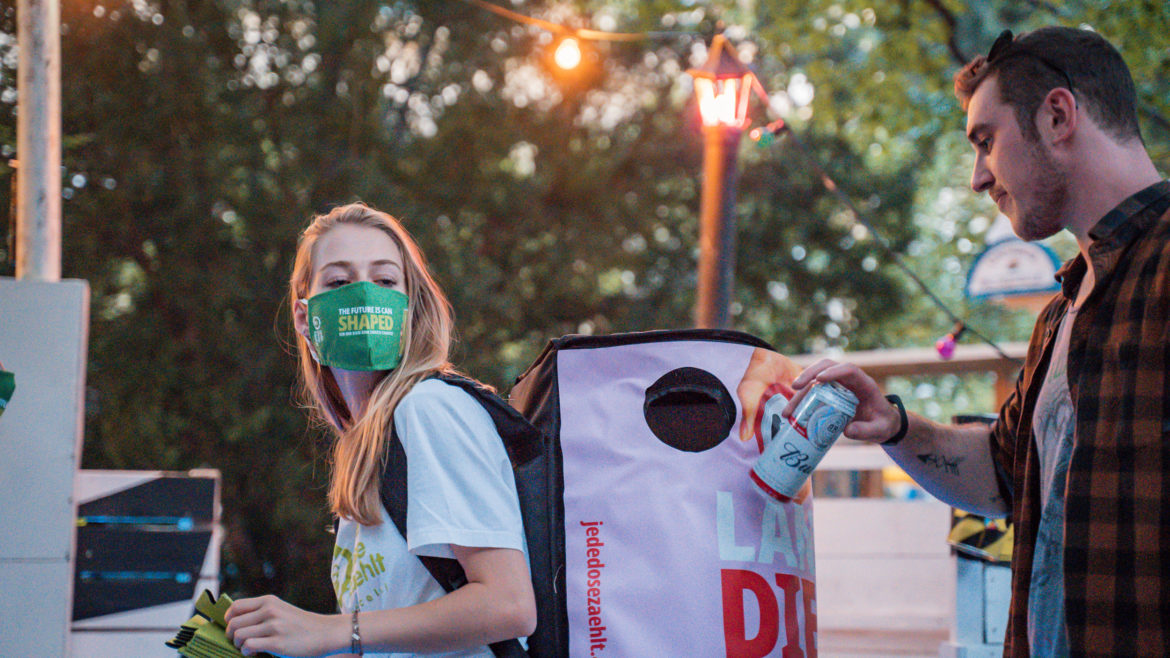 The COVID-19 pandemic resulted in the cancellation of all major events in Austria. However, a few pop-up outdoor events were organized in Vienna in late summer, and of course we used the opportunity to contact our target group and inform them about can recycling, strapping on our newly-branded backpacks and masks.

We were also featured in the organizers’ promo video, so visitors were made aware of our brand before the event as well. 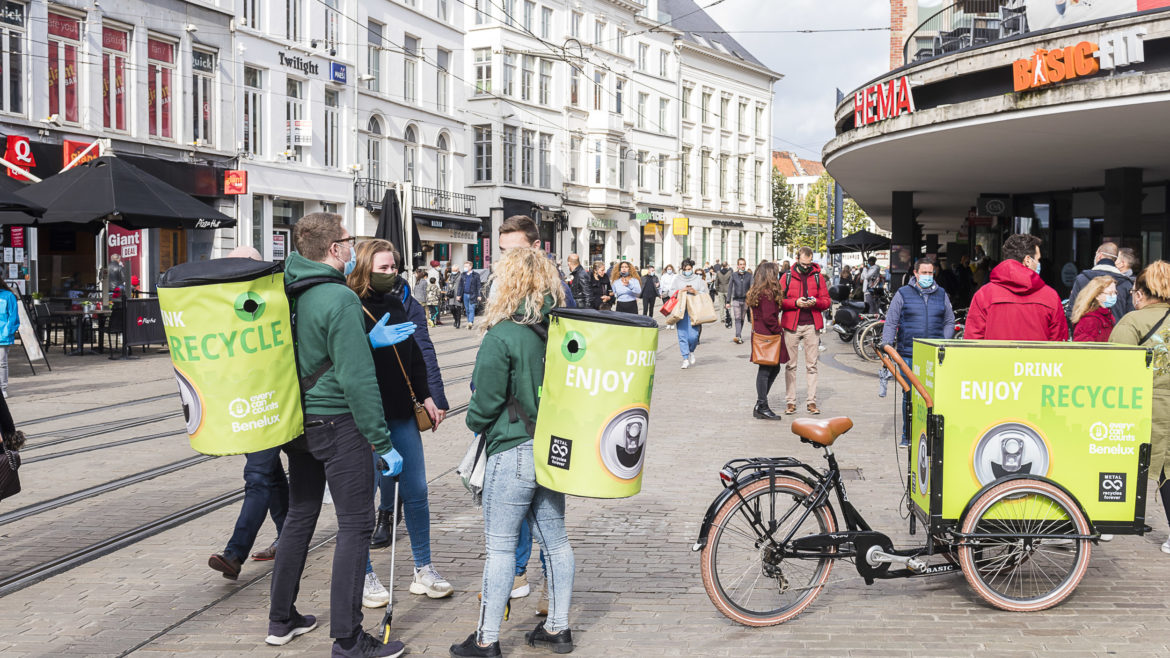 Awareness-Raising and Can Collection Campaign in the Streets of Ghent

On October 10, an Every Can Counts team equipped with can collection backpacks and a custom three-wheeler roamed the streets in the centre of Ghent, Belgium, to raise awareness about the sorting and recycling of cans.

On that sunny Saturday, the enthusiastic team engaged with passers-by consuming cans in the historic heart of Ghent and explained why it is so important to recycle aluminium cans even while consuming them on-the-go.

While the drink can recycling rate in Belgium stands at 98%, almost one can out of two is recovered from incinerator bottom ash, meaning that half of all cans are placed in the wrong waste bin.

The activities in Ghent were supported with a campaign on Instagram and Facebook, a press release, and resulted in a two-minute national radio interview. 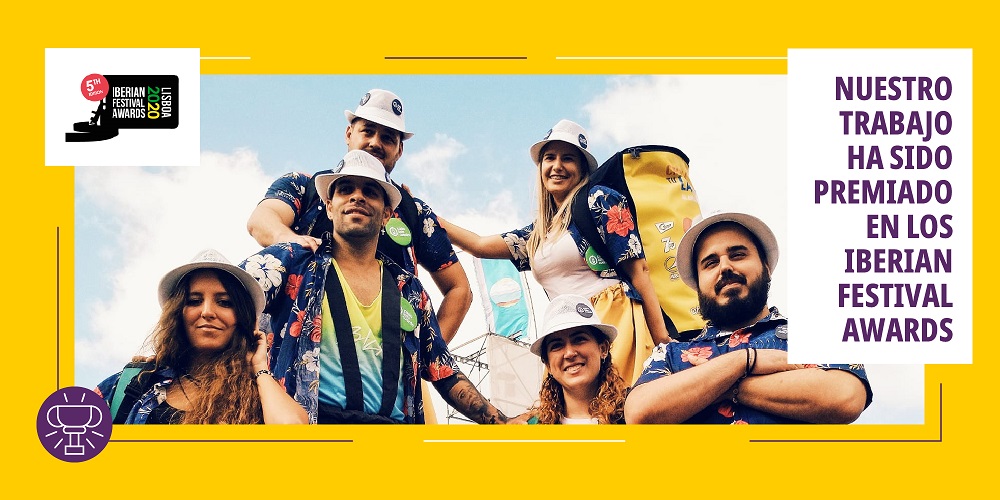 The Iberian Festival Awards Gala in Lisbon on October 19th named Cada Lata Cuenta as the Best Service Provider for its work in 2019 at festivals such as Etnosur, Womad Caceres, O Son do Camiño, and Tomorrowland Porto, among others.

The awards are organized by the Portuguese Festivals Association, and the jury also declared #daralata, the campaign that took us to the five Galician major festivals with Estrella Galicia, the Best Brand Activation of the year.

These two prizes represent recognition of our work making festivals more sustainable through can recycling in 2019. Moreover, it brought attention to the brand as Estrella Galicia bases its communication strategy on sustainability, thus raising awareness about can recycling to protect our environment.

The IFA’s recognition it is not just for Cada Lata Cuenta, but for the entire Every Can Counts team that strives to create the best and more engaging and sustainable events.

We want to thank the jury for its decision and extend this recognition to all of us who fight to take care of our environment and to create a safe and sustainable culture. 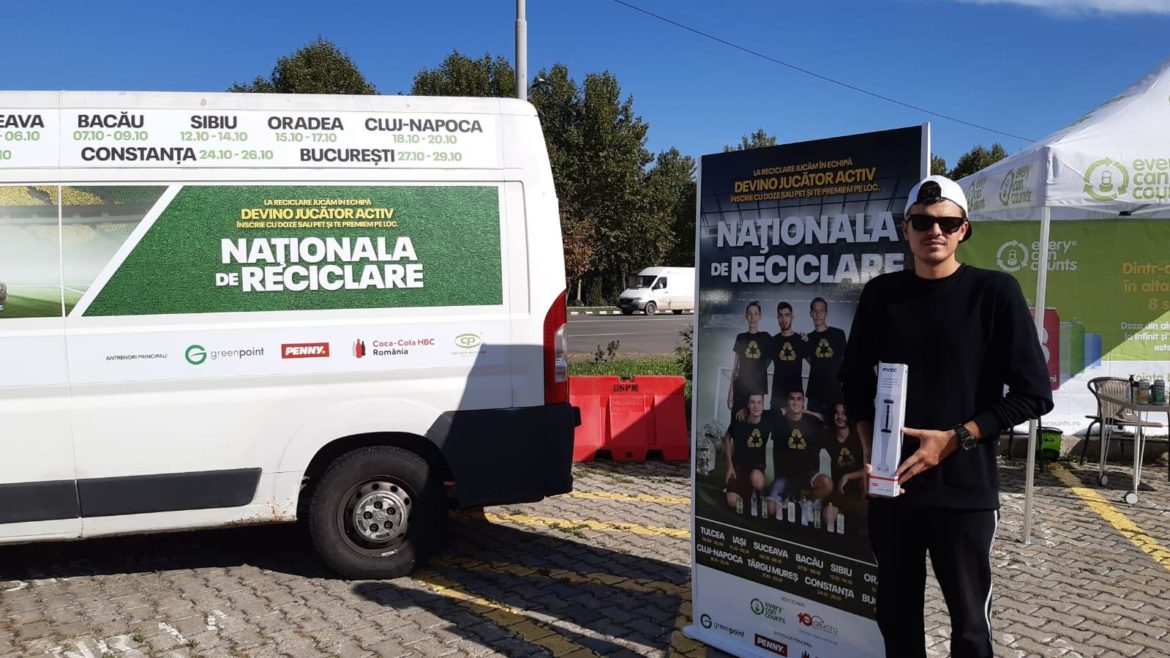 Every Can Counts Romania started a-ten-cities road trip in order to find and award Romanians who recycle their drink cans and PETs, and to increase awareness on becoming active doers.

Nationala de Reciclare started on September 24 with the purpose of creating a national team of people who do their best to recycle as much as possible, and it succeeded with over 14,000 people from the first five cities receiving our message, and over 12,398 drink cans and 11,059 plastic bottles (PET) were collected in Tulcea, Iaşi, Suceava, Bacău, and Sibiu. The impact of the campaign was reflected on social media as well, with over 193,000 people from these cities reached. The campaign ended by finding new recycling champions also in Oradea, Cluj-Napoca, Târgu Mureş, Constanţa, Bucureşt. 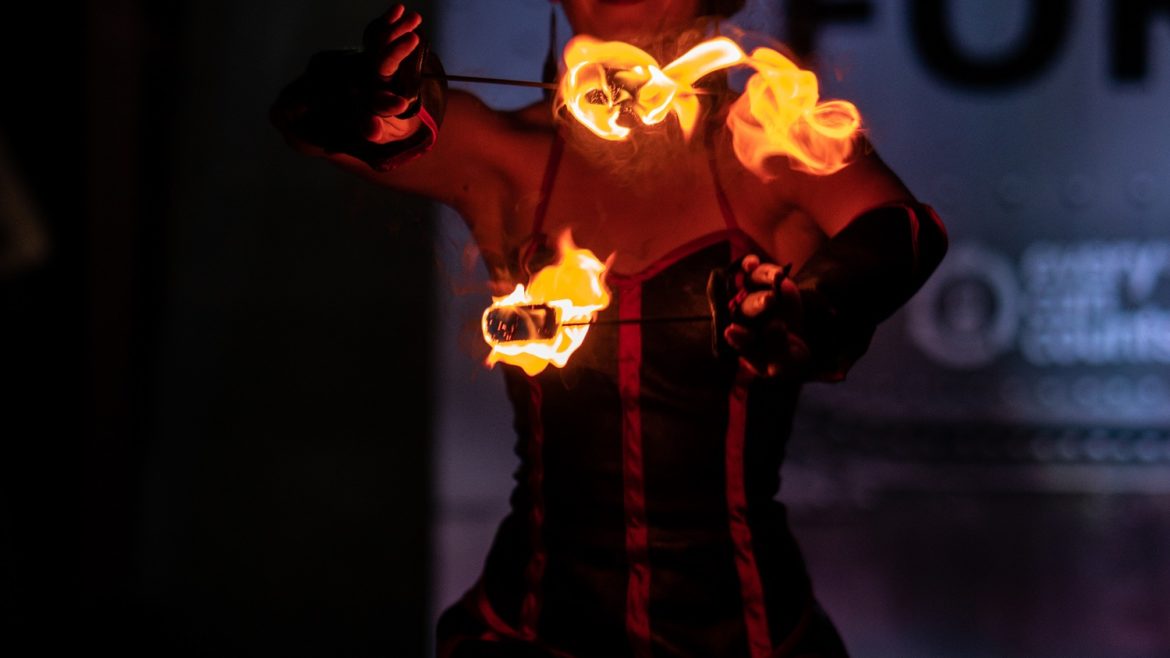 The Recan Foundation and the Vinča Belo Brdo Archaeological Site joined forces to promote metal recycling and its positive impact on the eco-stability of our planet. The endless recyclability of metal was the central topic of an event organised in the Barutana in Belgrade.

It provided an opportunity to combine the missions of Recan and Vinča in a unique way. Support was also provided by the EXIT Foundation, part of the renowned festival team with a special focus on environmental protection.

The prehistoric site in Vinča at Belo Brdo hill on the Danube bank represents a globally-recognised archaeological site with artefacts dating from 5300 to 4600 B.C. The Vincan culture made a mark in numerous ways, and the link with the Recan Foundation lies in the fact that Vincan culture was the first to start melting metal. As metals have been recycled so many times throughout history, the molecules that were melted in Vinča for the first time have been in circulation to the present day. 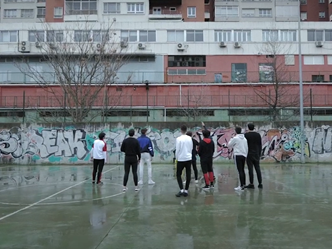 Drink cans are present in the best moments of our lives. If you recycle them, they can come back to accompany us again and again.

All drink cans are equally recyclable whatever their colour, size or shape.

Let’s recycle every can across Europe! Together we can make a difference!

EMBARK ON A JOURNEY THAT NEVER ENDS 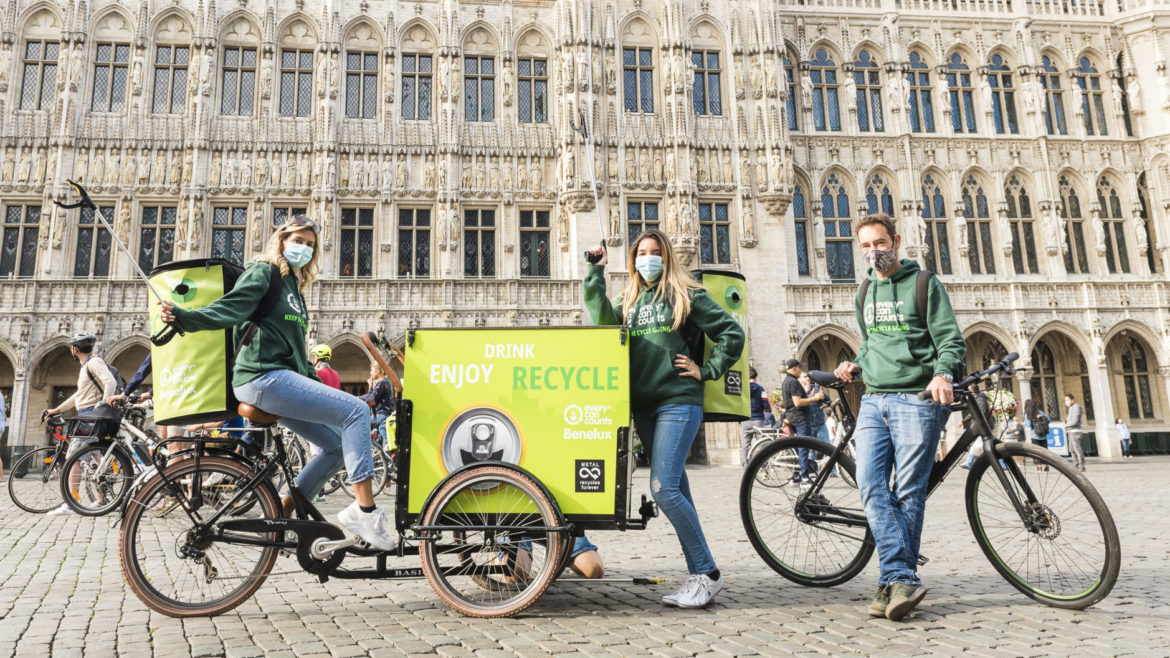 Every Can Counts Roamed the Streets of Brussels During Mobility Week

On Sunday, September 20, a team from Every Can Counts Benelux circulated the streets of Brussels to raise awareness about the sorting and recycling of cans. Whether on foot, by bike, or on a scooter, the people of Brussels occupied the public spaces to go for walks and play sports.

A team of two hostesses and a tricycle driver walked and cycled around to collect cans being emptied and most often not collected for recycling. At the same time, they passed on to consumers the manifold advantages of the aluminium drink can including its infinite recyclability! 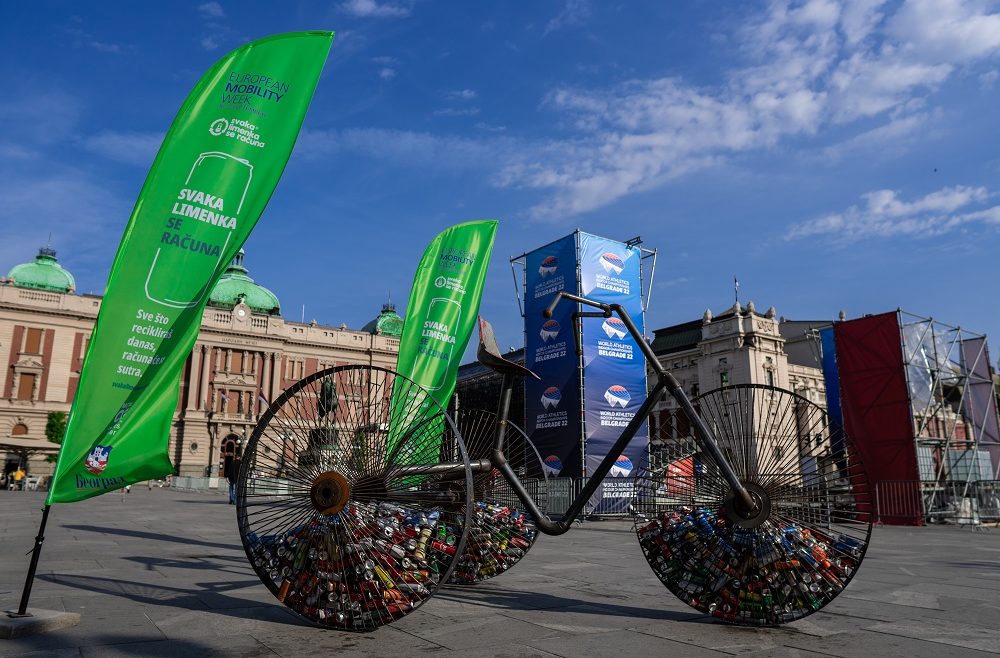 European Mobility Week is here! In collaboration with the Mayor’s office, we placed a voting box and our steampunk-inspired installation The Tricycle by artist Viktor Kis on the central square in Belgrade. We are proud of this partnership and happy the whole city can enjoy our activities on September 17-22.

Metal letters were set up to collect cans in collaboration with Dogma brewery, and the MRF logo was installed along with the Dogma inscription. Can collection is still in progress and the letters are almost full! All the money from the recycled cans will be donated to the Humanizacija association for the purchase of a vital functions monitor for the children’s hospital in Sombor.